Hiroi-sensei has also appeared in newspapers as a well-known Edo top maker. Below is a translation of an article entitled “Setting out to restore traditional wooden toys” that ran the newspaper Asahi Shinbun on January 14, 1982. See the original Japanese article at the link below. 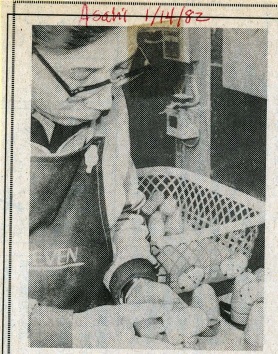 In Sendai, there is an artisan whose work appeals to people who love toys made from wood; he continues the restoration of these traditional objects. An artisan turning pulpwood on the lathe and making toys, Hiroi Michiaki (48) is a specialist* even among woodworkers. At the New Year, his “sulking dog (sune inu)” top was brought back.

Hiroi was born in Tokyo’s shitamachi in Honjo Fukagawa. Hiroi is a third-generation [woodworking] specialist ; his grandfather did [woodworking] as a pastime and quit his job as a doctor to become a specialist. Hiroi is an artisan who inherited the tradition of Edo-style wooden toys. He was evacuated [during WWII] to Sendai.

The world of making wooden toys on lathes is vast. Many of the items that Hiroi produces are technically difficult and take a great deal of labor to make. In the time that he could make three kokeshi, he often can only make a single [wooden top]. It takes a month and a half to make about one hundred tops. “I’m deprived of free time,” he laughed. He recalls how to make many of the toys by muscle memory. There are no diagrams or exemplars. One by one, the toys are resurrected from what the body remembers. Asked by a Tokyo-based admirer [to make them], Hiroi began to create the wooden tops with the goal of restoring one hundred types over fifty years. “When the lathe spins, your hands naturally begin to move, and the shape [of the top] appears.”

“The  first dream of the new year (hatsuyume)” is [a top with] a falcon spinning at the summit of Mt. Fuji. “Monster (obake)” is one where a monster leaps from a well when the top stops spinning. There are many stylish, refined tops that seem to embody Edo toys. On the stand of the “sulking dog” top for the New Year there is a pattern of a tengu with his [elongated] nose and an okame with her [open] mouth, designed to complement one another. The dog is sulking about their good relationship.

Hiroi’s admirers come to his shop to receive his toys and enjoy conversation with him while playing with the tops. “Everyone is carefree and cheerful.”

* The term used in the article is 紅物師, which is slightly unusual. The 紅 character refers to a deep red color, and akamonoshi 赤物師 (赤 meaning red) is another word for a kokeshi maker. So here the use of 紅 might be a play on characters to mean a much deeper talent.