Hiroi-sensei has appeared many times in Japanese newspapers. Below is a translation of an article entitled “’Edo tops’ made in Sendai .” See the original Japanese article at the link below.

“Edo tops” made in Sendai

When you say “tops,” you might imagine tops you’d play with outdoors, but these are “land tops” (jigoma 地独楽). Edo tops are a type of tops known as known as “parlor tops”“(zashikigoma 座敷独楽),  which you enjoy by spinning them in your home and decorating with them. In addition to single-block tops, there are all kinds of tops that rely on centrifugal force.

The blueprints for the tops are in my arms

“Even if you ask me how many types [of tops] there are,r” says artisan Hiroi Michiaki of the tops he has vividly colored, “If you were to categorize them like kokeshi, it would probably be over a thousand. Well, probably about 600.”

To the question “are there blueprints?” Hiroi says but one word: “No.” When I reply, “Then they must be in your head, right?”, he says, “No, there’s nothing in my head. But these arms have memorized them. My hands move on their own.” I’m speechless for a little while at this perhaps profound statement.

Edo tops—Wax polish makes the bright colors–the characteristic red but also purple, green, and yellow– stand out all the more. Once, these tops were intended for the children of high-status warriors and wealthy merchants, having little to do with commoners. As such, the finishing touches were minded to the smallest detail, and except for the single block tops, “they express the characteristics and old tales of each time period, and there’s no [top] without a history.”

This is something that can be said for all of Hiroi’s wooden toys, and even if they appear to have no origin story, that is simply a product of having forgotten it in the present day.

The spirit (kokoro) that protects tradition

When asked about the “spirit” of continuing to make Edo tops, a central part of [Japanese] wooden toy traditions, he dismissed this question smoothly, saying, “[Tops] are not something to tout as tradition. Because I was born an artisan, there’s no other path for me.”

On the subject of successors, he first said, “Right now about ten people are coming [to apprentice],” seemingly unworried, but added regretfully, “It would be difficult for them all to inherit [the practice].”

Why Edo tops in Sendai?

“During the war, we evacuated to Miyagi. We lost our chance to return to Tokyo,” Hiroi said, adding, “In Tokyo, there are many people in Tokyo with resources and many people who understand [our work]. And people who suggested I come back.” Saying that his younger brother was working hard on making tops in Tokyo now, Hiroi seems determined to preserve the Edo top tradition here in Sendai’s Fukuhara.

Hiroi also makes kokeshi, but doesn’t seem very interested in them.“Kokeshi are easier to make compared to tops, and sell well, but…” he said, although he was unable to identify the reason why he wasn’t motivated to make them. 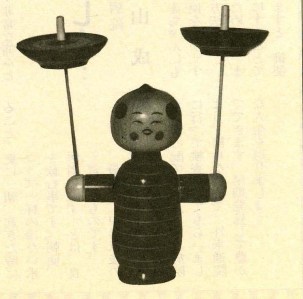 There are Edo artisans here

Hiroi’s wife, listening to us nearby, says, “When we have an order deadline approaching he procrastinates. Then when he starts, he’ll skip meals and stay up turning the lathe late into the night. If he’s even a little unsatisfied with the result, he’ll just toss it out.” Because these tops now are being gifted to an orphanage , Hiroi-san has stopped tossing out ones he doesn’t like.

Hiroi, who was born an artisan, aims only to create the best products. Right now, he only makes direct sales aimed at about sixty people without going through wholesalers. His reason is that “if you sell them in stores, they can mark them up to absurdly high prices.”

“Despite all the effort you put in, you don’t make much money. It’s the kind of work only an idiot could do,” Hiroi says [joking], finally adding, “This is the only path for me, now and forever.”